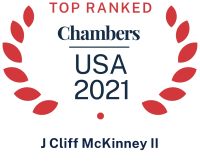 Cliff McKinney is a transactional attorney at Quattlebaum, Grooms & Tull PLLC.  His primary practice is real estate law and business and regulatory matters related to real estate.  A Fellow of the American College of Real Estate Lawyers, Mr. McKinney is listed with The Best Lawyers in America® in the areas of Real Estate Law and Land Use and Zoning Law, is recognized by Chambers USA’s Guide to America’s Leading Lawyers for Business in the area of Real Estate and selected as a Mid-South Super Lawyer in the area of Real Estate by Super Lawyers.  He was named the Little Rock Lawyer of the Year – Land Use and Zoning Law by Best Lawyers® in 2020 and 2022 and is rated AV Preeminent® by Martindale-Hubbell.  Mr. McKinney has served as lead counsel on dozens of multi-million dollar transactions throughout the mid-South region.  His projects include one of the largest real estate transactions in the corporate history of a major global retailer.  He also represents restaurant owners, including franchisees of national chains.

In addition to working on the transactional aspects of a project, Mr. McKinney assists clients with financing, business organization, environmental and land use issues.  His practice includes guiding clients through the regulatory process, including obtaining zoning changes and other governmental approvals.  He has extensive experience assisting clients in obtaining appropriate business licenses and approvals, such as alcohol permits and franchise agreements.  He also assists clients with permitting issues related to the Clean Water Act (e.g., U.S. Army Corps of Engineers 404 permits), the National Historic Preservation Act (e.g., Section 106 compliance) and the National Flood Insurance Act (e.g., letters of map revision).

Mr. McKinney also has experience dealing with real estate-related litigation matters, including adverse possession, boundary by acquiescence, prescriptive easements, quiet title, eviction, foreclosure and restrictive covenant disputes, among others.  Mr. McKinney has also been active in the legislative process, including serving on the Arkansas Bar Association’s Jurisprudence and Law Reform and Legislation Committees.  He has testified before the Arkansas General Assembly on many occasions and been involved in drafting and vetting real estate-related legislation.

Mr. McKinney is currently serving his sixth term as Chair of the Real Estate Law Section of the Arkansas Bar Association.  In that capacity, he spearheaded the creation of the Arkansas Real Estate Review and currently serves as one of its editors.  Mr. McKinney was the first attorney in the State of Arkansas to obtain the status of LEED® Accredited Professional, which affords him the unique ability to assist clients with environmentally-friendly green building projects.  Mr. McKinney served as the U.S. Green Building Council Arkansas Chapter’s Secretary and Treasurer and served on the Arkansas General Assembly’s Legislative Task Force on Sustainable Building Design and Practices.  He also serves on the state’s Old State House Commission.

Mr. McKinney is also involved in the academic side of real estate law.  Mr. McKinney is an Adjunct Professor at the University of Arkansas at Little Rock William H. Bowen School of Law where he teaches Real Estate Finance and Real Estate Transaction Skills.  He has written a number of law review articles on real estate topics, including implied covenants, deed drafting, boundary by acquiescence, adverse possession and landlord/tenant rights. He chaired the committee for the third edition of the Standards for Examination of Real Estate Titles in Arkansas and authored the Arkansas chapter for an American Bar Association book on institutional land use controls.

Mr. McKinney is President of the board of directors for Habitat for Humanity of Central Arkansas.  He served as Board Chair of Arkansas Rice Depot from 2008-2009 and remained active in the organization through 2015 when he served on the merger committee that resulted in Arkansas Rice Depot merging with Arkansas Foodbank to form the largest hunger relief agency in the state.  Mr. McKinney now serves on the board of Arkansas Foodbank.  Mr. McKinney chaired the Arkansas Bar Association 2011 Annual Meeting and the 2015 Mid-Year Meeting.  He currently serves on the Arkansas Bar Association’s Board of Trustees and is a tenured member of the House of Delegates.

Habitat for Humanity of Central Arkansas Board of Directors, 2010-Present (President, 2015-Present)

Ronald McDonald House Charities of Arkansas Board of Directors, 2012-2014

Justice in the Hinterlands: Arkansas as a Case Study of the Rural Lawyer Shortage and Evidence-Based Solutions to Alleviate It, with Lisa R. Pruitt and Bart Calhoun, 37 U. Ark. Little Rock L. Rev. 573 (2015).

Caveat Who?:  A Review of the Landlord/Tenant Relationship in the Context of Injuries and Maintenance Obligations, 35 U. Ark. Little Rock L. Rev. 1049 (2013).

Adverse Possession and Boundary by Acquiescence in Arkansas: Some Suggestions for Reform, with Prof. Lynn Foster, 33 U. Ark. Little Rock L. Rev. 199 (2011).

Are You Trying to Imply Something?: Understanding the Various State Approaches to Implied Covenants of Continuous Operation in Commercial Leases, 31 U. Ark. Little Rock L. Rev. 427 (2009).